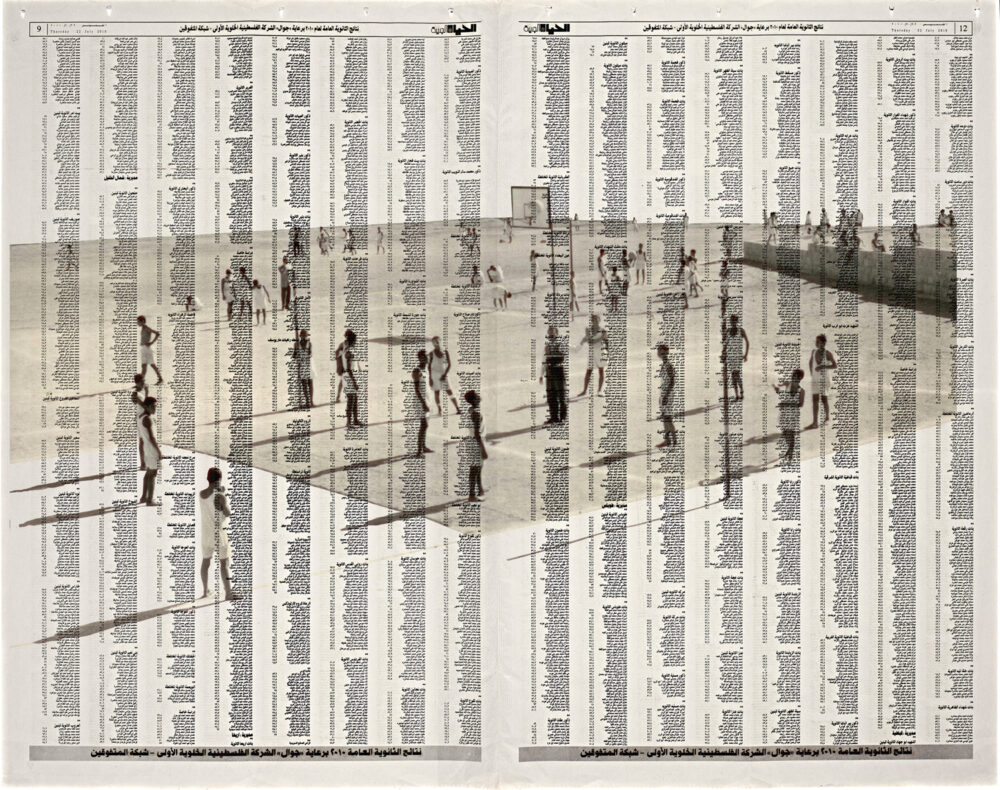 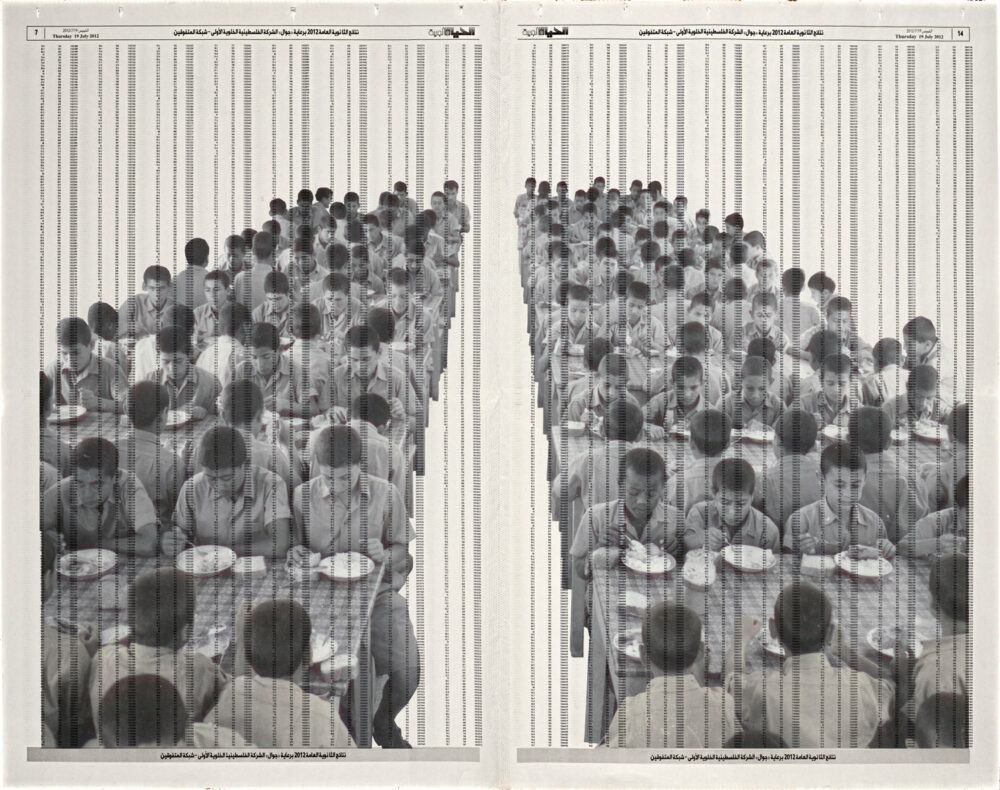 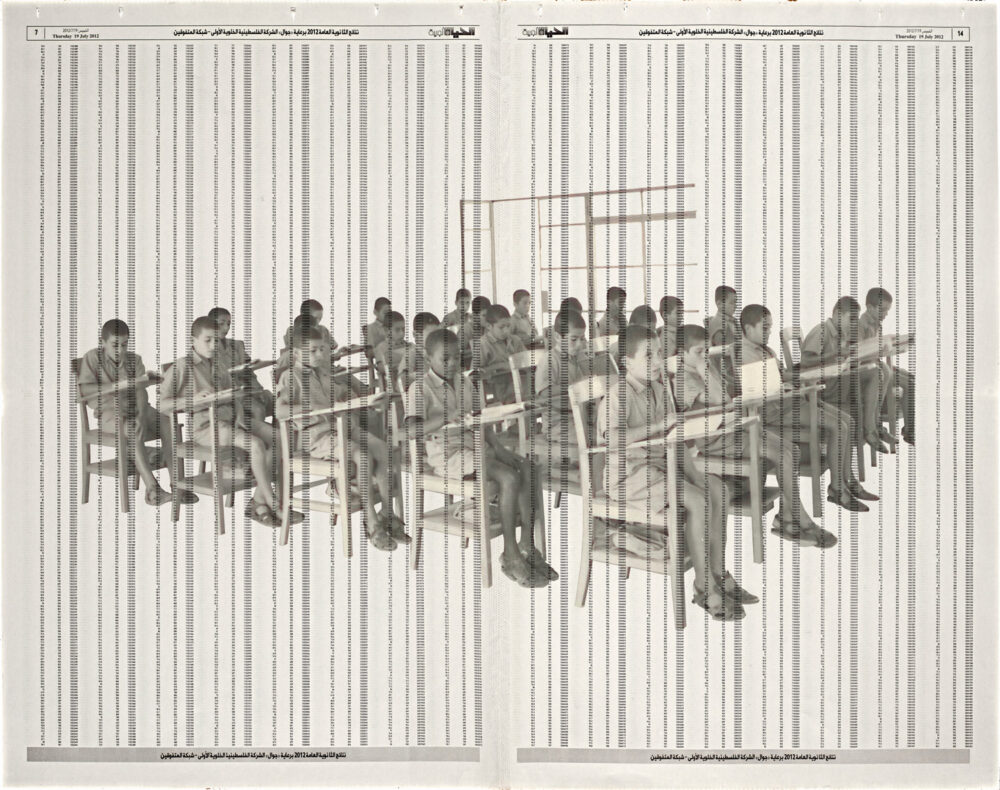 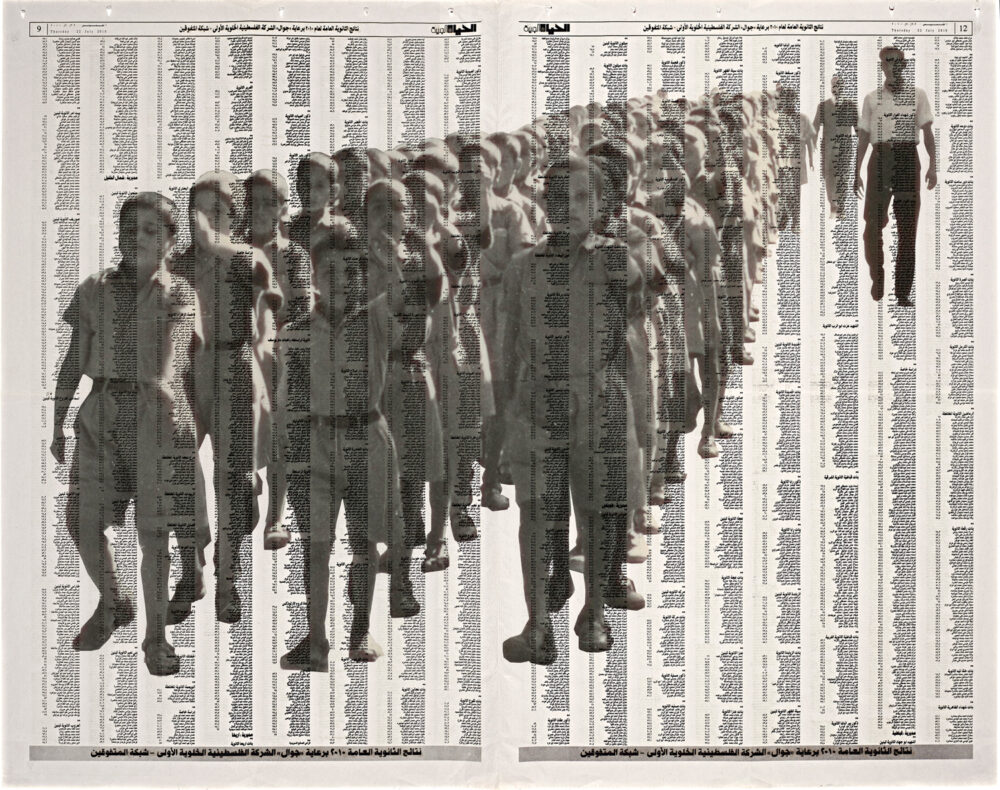 In July 2010, I picked up a newspaper on the street in Ramallah called “Al-Hayat Al-Jadida!”, the 15th Year. People were driving through the streets, honking horns, obviously celebrating something. I found out that this is the annual newspaper to announce all the marks of all the students in the West Bank, Palestine. In 2012, I went to the publishing house to ask for these newspapers and I learned by now the law has changed and only the student register number and the marks are being published, without identifying the person behind the numbers.

I did an inkjet print, amalgamating one page of the newspaper with names and marks / numbers and marks of Palestinian students and a printed images from the vocational boarding school of the ADS in Jericho in the 1050th. The Arab Development Society, an experimental model combining education, vocation and rural farming in the desert of the Jordan Valley in Palestine, exists since 1948. Learning skills and crafts while working the land and living in communion was the approach to re-think and shape a regional civil society transformation.

In 1945 a strategy was developed by Musa Alami [2] to improve life in Palestinian villages with “the object of raising the social, economic and educational standards of Arab villages in Palestine.”[3]

The Arab League approved the plan “to strengthen the fallah, to rid them of depth and thereby save the lands from being lost to money-lenders and to fall into alien hands.” A survey of 350 villages was conducted to define the needs in 1946 and 47.  In 1948, the course of history in the region transformed the plans and lead the need not only “to raise the standard of existing villages, but to create the very conditions of an ordered and settled life”[4] for ten thousands of refugees.

In 1948 a group of refugees and Musa Alami started to dig for water in the desert of the Jordan Valley and the success of this enterprise led to the foundation of a non-profit organization; an agricultural school and experimental farm in Jericho providing training for the Palestinian refugee population: THE ARAB DEVELOPMENT SOCIETY (ADS). It ran as vocational education center and farm until the 1990s. Learning how to collectively farm the land and built a civil society was the core of ADS. Musa Alami ran the ADS jointly with a board until his death in 1984. The educational vocational training center that provided skills and education for several generations and thousands of Palestinians closed in the 1990s due to various reasons.

ADS still exists[5] today and remains as dairy, date and fish farm which provides large parts of the West Bank with their local products. 65 people work on the farm and 21 families still live on the large and beautifully designed territory located right next to the King Hussein Bridge in Jericho, West Bank, leading to Amman in Jordan.[6]

The prints are part of Susanne Bosch´s artistic research project “Changemakers” looking at the strategies of transformation and creation of a civil society that the ADS committed to over the past 65 years. Generations of now adult Palestinians have been trained and raised in their ethos, which focused on introducing a lifestyle focusing on people and land. The incentive behind the plan was the idea of a joint, collaborative, social action to transform the Palestinian civil society.

Most change making does not fit into the economic understanding of life, as it is a laborious, time consuming and tender process. The work in the gallery looks at the level of making (light boxes and drawings) in various contexts (wall paintings: making from nature, in a high industrial setting, making from waste). The light boxes, made out of second hand tea crates, correspond to the idea of laborious turning of a waste material into an artifact.

Change Makers have been exhibited at:

2016 Art Sale Ramallah, Palestine. May-November 2016, Ramallah, Palestine
For the first time, 38 prominent International and Palestinian artists are coming together with 28 graduates to support the Academy of Fine Art Palestine and its vision of art education in Palestine through this one of a kind fundraising initiative.

[1] Title of a brochure by the Arab Development Society, October 1953, Second Edition, The Commercial Press, Jerusalem
[2] Social activist, lawyer, nationalist and politician (1897–1984). Alami raised funds for building villages for the refugees and founded an agricultural farm whose produce was exported. The farm was destroyed in the course of the Arab riots in Jericho against the British but with help from the World Bank and the Ford Foundation, Alami managed to rebuild it. According to Gilmour, who interviewed Alami in February 1979, the farm and school were highly successful until the Six-Day War. Further reading: “Palestine is my country”; the story of Musa Alami by Geoffrey Warren Furlonge, Sir, New York, Praeger [1969]; Ben Gurions “My Talks With Arab Leaders” and David Gilmour “Dispossessed. The Ordeal of the Palestinians”, Sphere Books, Great Britain, 1983, (first published in 1980) pp. 35-36, (Gilmour interviewed Musa Alami in Feb. 1979)
[3] The Arab Development Society, October 1953, Second Edition, The Commercial Press, Jerusalem, p.4
[4] ibid, p.12
[5] http://www.facebook.com/pages/Arab-Development-Society.
[6] Due to location, large parts of the ADS property fall onto area C and are therefore unusable. 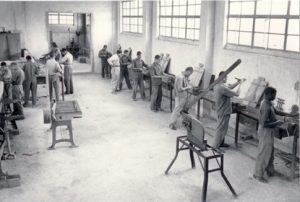 Photographs found onsite from the 1950th. The Photographer: Jerusalem based Hanna Safieh. He documented the activities of the boarded boys to evidence the progress within the organization, probably for international funders. 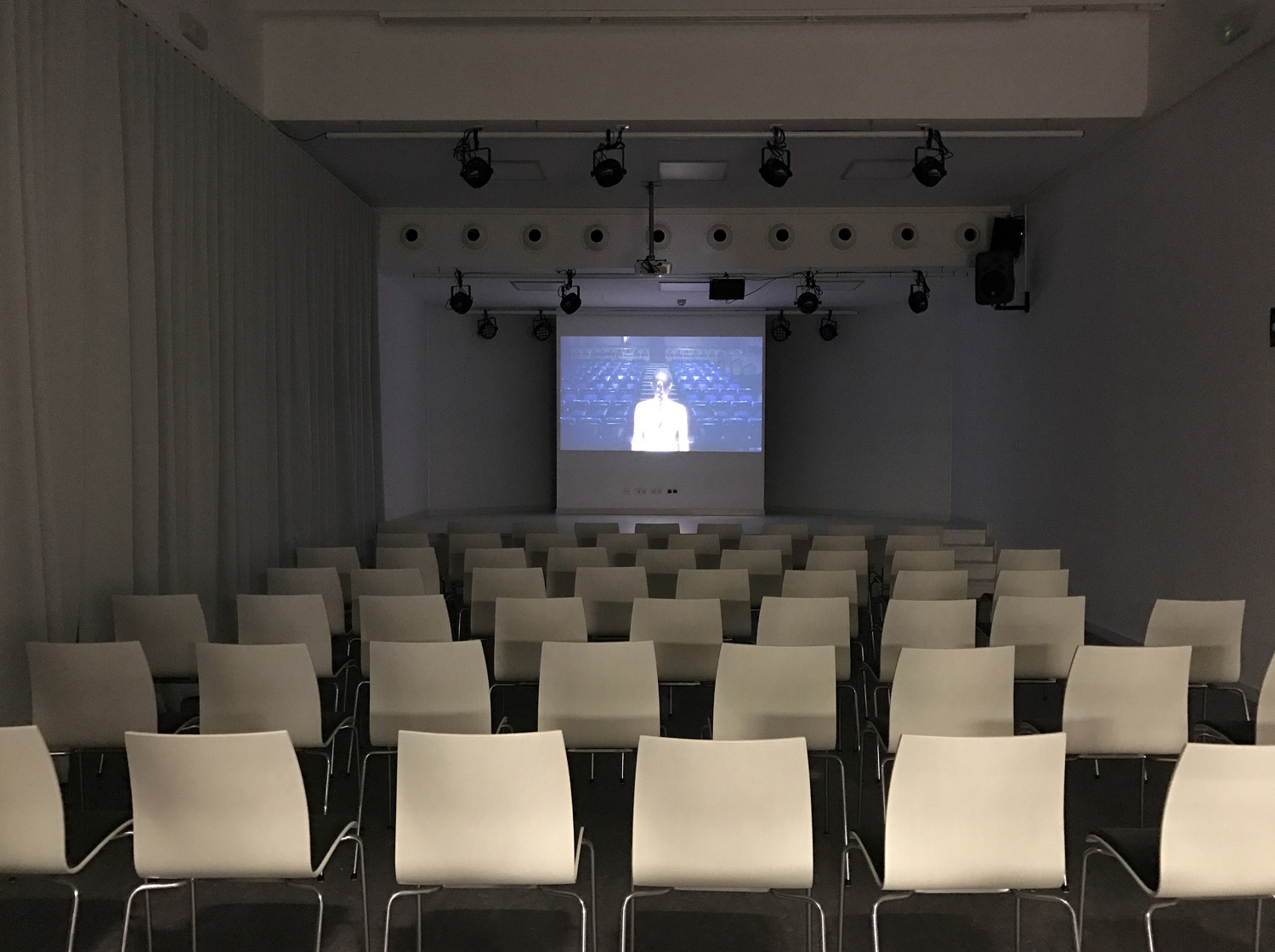 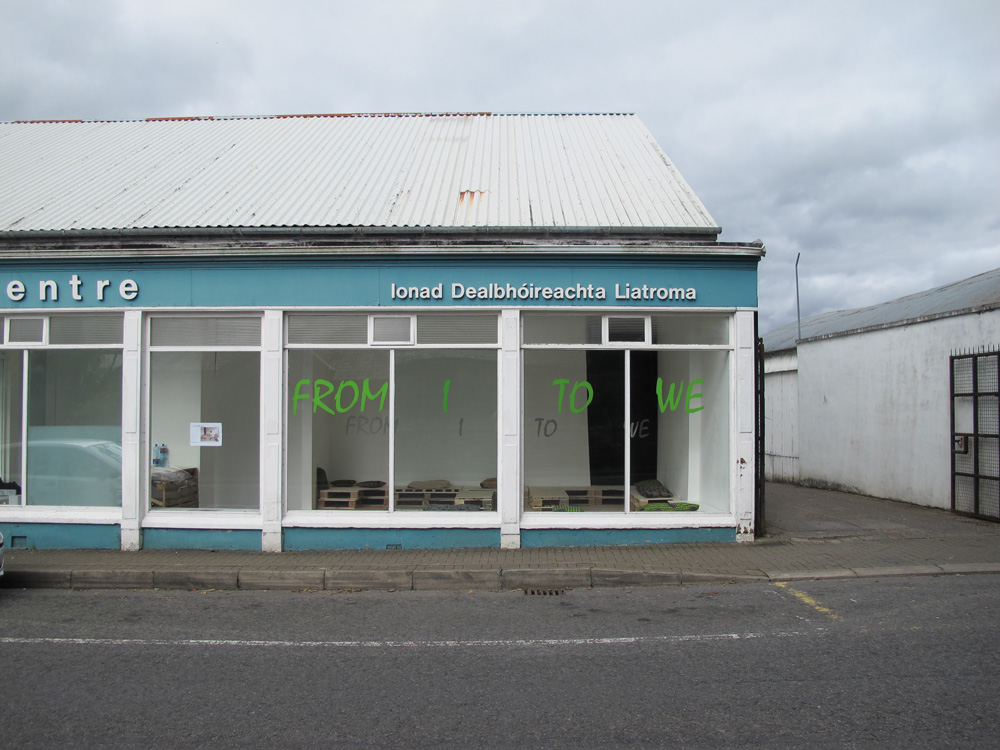 FROM I TO WE 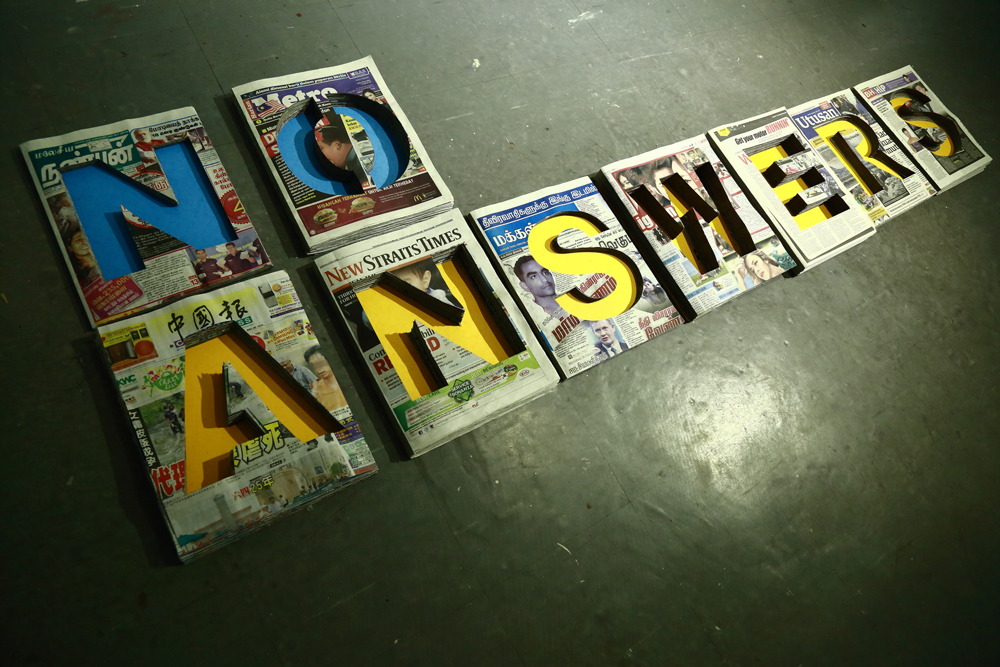 What we believe in